Sometimes the core of your pain becomes the brush (Why “Re…” is not for Sale?) 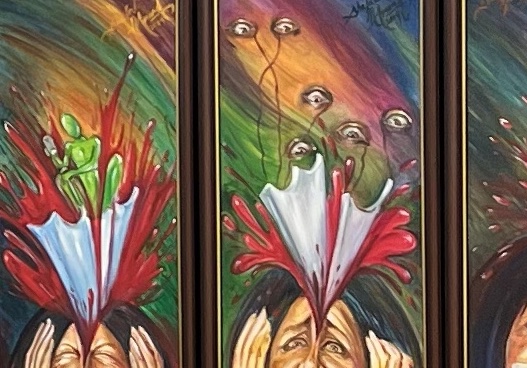 If it shackles you, binds you, enthralls you, reaches deep within your chest to squeeze your heart – remember that none of it was designed to do what it did, because artists paint to express and not to impress.

We can only paint what we’ve experienced – personally or empathetically – rest all…even when painted or sculpted with exceptional talent, remains a craft. Noted artist, sculptor, and recipient of Padma Shri, Shri Biman Das, spoke to me during my first show and said, “the experience of pain makes an artist.” I agree. I also think that if I had a choice, I’d probably choose not be an artist than to be mauled so badly by Dame  Misfortune. This brings in the element of luck (or ill-luck) into the mix. The question that we who aspire to become artists, must ask ourselves is – if pain is the currency then how much of it are we willing to earn, before we can pay for our brushes and chisels to develop a core that’s connected to our heart?

Questions abound. Questions that are never answered. Questions such as: Why art emerges from pain or misfortune? Does it always happen so? I would like to say, “yes,” and yet I won’t, because that affirmation could open a densely packed can of rotting worms a.k.a. questions best left unasked and unanswered.

If you’ve been to any of my shows, you may have seen the Not-for-Sale sticker on “Re…” You probably are among those who asked why I won’t sell it.

I won’t sell “Re…” because I’ve lived through “Re…” and then survived to paint it; and also because I’ve experienced the effect it has on its viewers. When “Re…” is on display in the art-galleries, the viewer is under its influence only until they leave, carrying their unique connection with “Re…” in their hearts. They go, possibly to a warm and happy coffeeshop or restaurant, or even back to their routine, and in time they forget “Re…”

But if it’s bought – it will stay in someone’s house – to torment them each day. They’d look at it and every time find something new – feel something new…until someone else for whom it would just be four canvases with faces, would inherit it – and not feel a thing.

I’d rather destroy it before I die…but death mostly arrives unannounced, and because I don’t want to part with it while I am alive – I’d probably fail at destroying it. I don’t want to part with it because its core is still attached to my heart. Once in a while, it gives my heart a little tug making it twist in agony. Now, after having lived with “Re…” for more than five years, I can muster a faint smile I look at it and tell myself this is why I called it, “Re…”

And yet, there are things that I’ve done that I had promised myself that i would never do. Pain motivates you to find relief through a mile long range of expressions – so I honestly don’t know if I will be able to keep my promise.

“Re…” found me as its creator. It is the writer of its own destiny. It has a mind of its own. I can only wait and watch.

(Note: Written in response to the question asked by visitors to my show at the Lalit Kala Akademi. “Why Re…is Not for Sale?”)